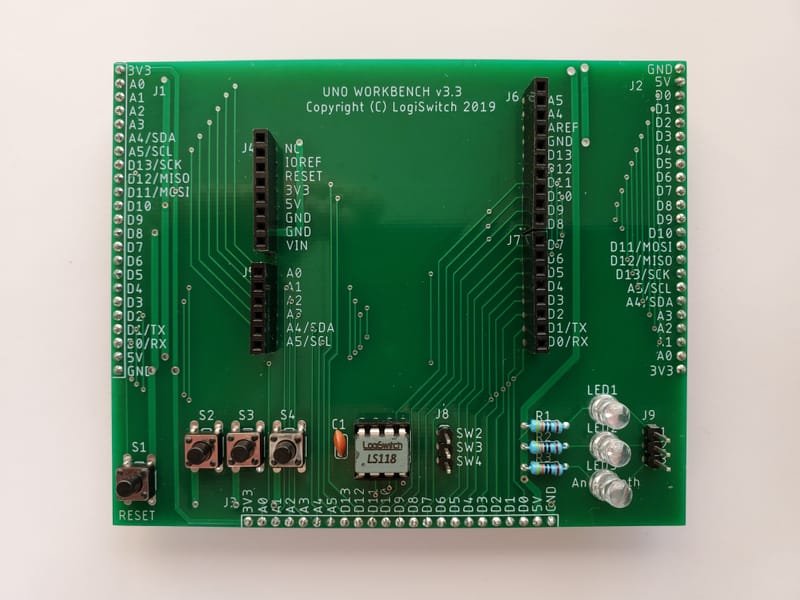 Arduino Uno WORKBENCH Kit with LS118 (Handshake) Debouncer Chip. The Arduino Uno WorkBench provides all of the Arduino Uno's power and I/O pins to as many as three Breadboards. It includes for your convenience three uncommitted on-board LEDs and switches along with (of course) a LogiSwitch LS118 (handshake) debouncer chip.

This kit provides all components to support three uncommited switches and three LEDs for I/O operation used in a high percentage of all Arduino projects. The switches and LEDs may be wired to the I/O pins of your choice. Of course a LogiSwitch  LS18 debouncer chip is  included for trouble-free single transition switch signaling. The LS118 (handshake) debouncer chip specifications may be found HERE.

The jungle of wires don't only clutter your projects, they make it hard to wire and hard to troubleshoot. The LogiSwitch Arduino Uno WorkBench connects all of the Arduino's power and I/O pins out to three separate breadboards to provide plenty of workspace for the most complex Arduino projects.

Below is a clip showing two identical circuit implementations of the same project side-by-side. The layout on the left demonstrates the advantages of the Uno WorkBench over the one with the rats nest of wires on the right.